Frank Is Looking To Kill Someone Tonight

Staten Island Hardcore: Cannibal Overdrive: Eat Your Friends: "In 1992 the out of work Purple Pie Man .. found himself alone, and unwanted, the berry patch girls having grown up and having no further need for their friendly foe. He found him self traveling abroad, and found himself on a tribal beach, where he observed a strange ritual by native tribsmen.

They were having a fishfry,put were placing the fish in strange jelly. He watched as they gained all kinds of strange abilites and superpowers. Using his berrybirds, he snatched some of the jelly. Taking it back to his hidden labratory, he isolated the properties of the substance, and was able to encode the jelly into a computer code, and within the code all that would come into contact with it would swear allegience to him.

He unleahsed this code on the then newly emerging internet. The virus was code name "Cannibal" but it quickly ran amuk, into overdrive if you will.

The symptons were all found in the name, if one caught the Cannibal virus, they would quickly turn on their friends, and pursue a seemingly selfish agenda, a agenda that was actually placed subconsciously by the Purple Pie Man. Little known to the Pieman, he was actually unleashing a newly empowered Satan.., fresh from a 500 year vacation outside of our dimension.....

One of the test subjects of the Pieman was the child molesting vagrant known thru the land as Stinkbox. Stinkbox main mutation was an abilitys was to wander aimlessly thru the town eating left over slaw wherever it was found. Stinkbox was actually the antichrist, but was too drunk on cheap wine to do much about it. He soon rejected the control of the Pieman and sided with even a worse villian, the terrorist Toad.., who made Bin Laden look like Bambi.


Together they fought the gravity defying children of the valley of the sun, who used sound and light to bend the laws of this plane of reality. At heart the Toad desired to control the sun and make all the world at hot and barren as his beloved desert. Stinkbox steals a shriking ray from the pieman and blasts and robs the Toads terror funds.

He flees and trys to buy himself a new identy to hide from both the Toad and the Pieman, and is almost tricked and turned to liquid by the all knowing and mysterious Waterfly. His color changes, and he realizes he had all the time he needs, to conquest man and eat slaw. .."-From The Book of Mugwah

"The History Of Music" is going to be my virtual online boxset, drawing from my archive of old musical projects. Staring with Cannibal Overdrive seems like an easy one.


Cannibal Overdrive (1992-1995) was my first band that I would play shows with. The band was founded by Mike Runner and Dan Reitz, who drafted me, and then I drafted Alex Armitage, who was a frequent musical collaborator of mine. We were joined by vocalists Rebbecca Rupp and Eileen Donlon.

The music heard here was recorded by Alex, on old school 24 track 2 inch tape, my last experience with that medium. We made demo tapes which we gave out to friends or sold at "Our Music Center", the finest record shop Staten Island ever had. The individual tapes were called "Eat" 1993 (the first 4 songs here) and "Your Friends" 1994 (the rest). Artwork by Rich Dimaio with help from Alex on Eat. -Ron Hill 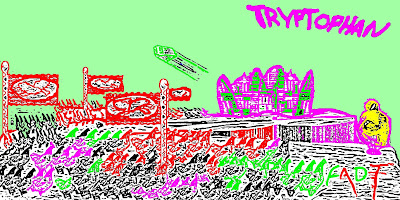 Tryptophan began in 1996. Originally, it was just me and Cannibal Overdrive drummer Mike Runner. The songs on our first proper cd were originally released on a dreadful Ron Hill solo tape called "Fadt", the Tryptophan cd is a supersonic remake. By the time we recorded this cd, Mike Runner had bowed out, and the ongoing line up featuring Frank Cavallo, Nick Purpura and myself had been established. This cd was recorded at "God City" (aka John Lisa's house) by Alex Armitage, mastered by Howard Rappaport at Sony Music. It includes guest appearances by John, Stapes and Mike (of Muddfoot), and Liz Heim (of Cradle).-Ron Hill