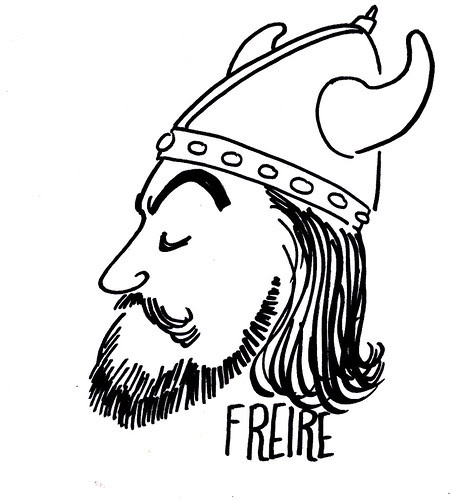 The Drew Wilkes was a celebration of the life and times of Drew Wilkes, featuring Nick, Adam, Marisa, Kevin, Drew Lil Bro Danny, and a scary clown with a large fake black penis. Drew protrait by Rachel Hirshfield Fiere.Thanks to the Muddy Cup for the hosting, and for Drew for being such a loser! 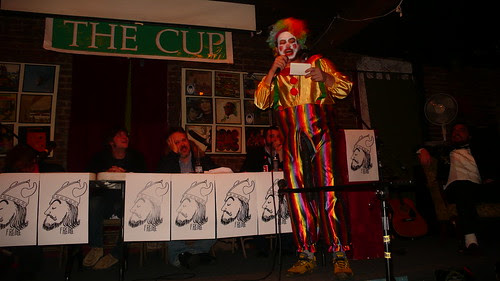 And here was my speech (thanks to Vito and McAllen for the extra material!) This also includes the lost Steve Goffin material as our new mayor had to go fluff at the Tony Bennett show. 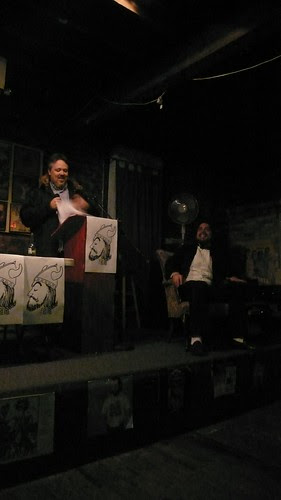 Hi, My Name is RH, and just like the rest of you, I'm here tonight to roast Drew Wilkes. That Orson Welles looking motherfucker over there. This is gonna be a strange monolog cause the jokes are gonna be real inside stuff, and also, I bet, not very funny and poorly delivered. Somehow Marisa thought it would be a good idea to get a bunch of nerdy musicians and clerks to try their hand at stand up comedy at Drews expense. Of course, this is the same girl that thought nothing of fucking dirty Nick.

Some of you might know that for the past year or 2 I have depended on Drew on a run a business I am responsible for. This fact is causing me to age rapidly, as I am clearly fucked having to depend on HIM. Look at my white hair! I used to be young, fat and carefree, but since Drew has entered the equation, I'm old, fat and completly stressed out. Can someone get me a cookie?
Drew and I sell comic books for a living, which in theory should be a very easy job. However, this is Drews second time around selling comics. He was fired once from the comic store, because he would frequently forget to show up. For days at a time. I think their was either girls or mushrooms involved, or perhaps both. Also he was spotted at this time dressed as an elf warrior at Game Stop.  At any rate, he was fired from his job at the comic store. Which is slightly more embarrassing then being fired from Martini Red, right Steve?

For the record, we hardly fire anyone. We pay terrible, because lets face it, we sell comics, and that's something you get into if you have daddy issues or are REALLY into  living in poverty, and Drew was perfect for the job...when he was there.  So like I said, Drew managed to get fired, but things being as they are, he got his job back a few months later. Slim pickings for good comic store clerks., but you know... this borough breeds kids with daddy issues and poverty acceptance.

Lately we have seen a more serious grown up Drew but he still has his little quirks. When he comes in late, it's not because he was out partying the night before...it's because a WarCraft expansion pack came out. Instead of not showing up, he instead has giving up bathing and grooming, which as any of you can ask Nick, will take you right to the top of the comic book chain. Instead of taking psychedelics and wandering the streets, Drew hosts Yu-Gi-Oh and Pokemon tournaments for 14 year old boys.

What the fuck happened to you?

Many of Drew good friends are here tonight:

Well, what can I say about Nick. I see him everyday, I work with him, I play in a band with him, I have a studio with him, and now hes moved his girlfriend onto my block. He keeps getting closer and closer to me. And from what I understand he no longer calls out Adams name when hes having sex with his girl,  and is now is calling out mine! You can't poke my bottom dude, thats reserved for Ditko. Ditko is my little dog, haha.

So I prepared this speech in advance, and I wrote 2 things for Steve whether or not he won:

Steve loses
Steve, your the loser in the race for the NS Mayor, I have to ask how does one lose anything to Tim Duffy? According to the NY Times, Tim is now forever locked in the collective unconsciousness as that drunk fat guy waiting for the ferry at 5am, The Ultimate Loser. You were beat by The Ultimate Loser. I still love you man, just dont fucking hug me.

Steve Wins
Steve, our new NS Mayor is here on the dias. So you actually beat Tim Duffy. It must feel like quite a victory. Usually the only time Steve feels like a victor is when he is shaking down special ed kids in the school yard for their candy money.

And Steves manager Kevin Devlin is here. I dont really know much about you man. But I understand you consider Drew and Steve as your best friends, so I based on this I must assume your into FURRY sex and then weeping on the kitchen floor afterwards.

And Adam and Marisa are here tonight..I guess by now everyone's seen adam and marisa's little clip online. i think it was called  2 girls one cup. (wait for thunderous applause). for anyone who doesn't know 2 girls one cup is the online movie where adam shits in a cup and then adam and marisa eat it and then throw up into each others mouths. you guys are a real class act. but then again i'm up all night beating off to it. Seriuosly thought, these 2 were cited in the NY Times as being 2 of the leaders of SI hipster culture. Paul Bruno and I want a recount. But they are like the Yoda and Obi-Gay Kenobi of SI hipsters.  These 2 have known Drew since they were kids and I suppose have had a lot of influence over him, shaping him into the man is today, their star student, the Luke Skywalker of dressing like a fag.